John married a newly arrived assisted immigrant Sarah Ann Varcoe on the 31st January 1865.  Sarah was born 6 July 1844 from St Stephen’s in Cornwall and had come as a domestic servant from England only two years before on the 26th February 1863.  Sarah had embarked from Southampton aboard the Stagenhoe.  Other siblings of hers would also come at different times from England to settle in Australia however her parents remained in England along with some of her siblings.

Sarah was the daughter of Richard and Mary Ann Varcoe of St. Stephen’s in Cornwall who had eight children.  She had been born in St Stephens, Cornwall in England.  In England, her fathers’ occupation was given as an Auctioneer.  Of her siblings Richard (1) b. 1833 remained in England and married Jane Dyer.  They lived in Cornwall.  Jemima (3) b. 1837 married John Cox and later in life, they would move to the US where they lived in Iowa and then Nebraska where Jemima and her husband are buried.  James (5) b. 1841 lived his whole life in Cornwall.  Their sister Louisa (6) b. 1844  married William Durant and they moved to Shebbear in Devon where he was from.

Bound for Australia as colonists:

William Edward Varcoe (2) b. 1835 was the first of several of this branch of Varcoe’s to leave Cornwall.  He arrived in Australia in 1856.  He married Emily Buckingham and they would eventually move to South Australia where they lived out their lives.  Click here for a picture of the gravestone.

Thirza (7) b. 1847 followed in January 1869 (as a servant) and married Sarah’s brother in law William Moss in 1870.  Thirza and William would eventually make their way to Edmonton in Cairns in the top north of Queensland.  When Thirza died in 1923 her funeral was held in the Methodist church, a nod to her Methodist upbringing. A picture of their grave Click Here

Absolom (4) b. 1839 also moved to Australia and married another Moss, in law to Sarah, Emma Jane Moss.  He arrived on the 20th April 1863 aboard the Mary Shepherd from Plymouth.  They lived their lives around Toorak in Melbourne.   Of the Varcoe siblings Sarah, Absolom, and Thirza would marry three Moss siblings.  Suffice to say relationships between the Moses and Varcoe family must have been cordial. 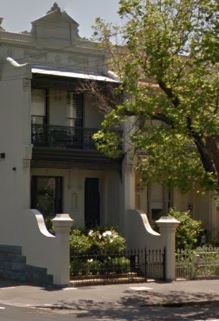 The Varcoe family were of the Methodist faith and were devoted adherents to the faith.  This is not hard to understand as they were families from Cornwall in England and non-conforming Methodism (brought by Wesley) was particular to Cornwall at this time as was the particular brand of Methodism adopted by the miners and farmers of Cornwall.   This largely incorporated roles of influence for women in active services to their communities and churches.  Sarah’s sister Emma Jane Moss (who married Absolom Varcoe, (brother of Sarah’s husband), was a founder and the first Matron of  Livingstone House, a temporary home for destitute children. She was one of the committee members of the Central Dorcas Society who managed the home.  The home was opened by Emma Jane in 1888 at the corner of Richardson and Drummond Streets, North Carlton.  By 1891 Livingstone House was moved to Nepean Highway in Cheltenham.  At this time it became a home predominantly for destitute boys.  From around 1905 the Methodist church took over the running of Livingtone entirely and it was renamed The Methodist Home for Children which it remained until 1953.  The home was then closed and the care of the children transferred to a new location in Burwood known as Orana Cottages (still run by the Methodist Church) and these remained open until they closed in 1988.  Read here.  Sadly it would appear that Emma’s daughter Ada who was working at the home would contract an infection (probably from the home) and die as a young eighteen-year-old.  One of Emma’s other sons, Stanley died of accidental drowning aged 21 in Beverley, West Australia where he was working as a train fireman.

Sarah and John would make their way from Melbourne to Daylesford where there was an emerging mining industry.  Daylesford was first settled by white settlers in 1838.  Prior to this time, the Djadja Wurrung tribes had been its inhabitants.  The area was first known as Jim Crow Creek or Wombat. It formed part of the gold diggings around what would become Daylesford in time. Gold was first discovered in the area in 1851 -1852 and Jim Crow Creek quickly became a popular area for the diggers seeking gold as part of the now well documented Victorian Gold Rush.  The gold mined out of the area was not particularly plentiful, nor the lead that was also found  What did open the area up for more experienced miners from across the world was the discovery of rich seams of quartz. Useless to the alluvial diggers but highly profitable to well financed and organised mine owners.  The area eventually became known as Daylesford and nearby Hepburn Springs. The region is situated on the northern fringes of the expansive Wombat Forest.  At the time that John Moss brought his wife Sarah and small family to Daylesford (around 1872) mining was still a thriving industry in the area.  John is listed on his son John Henry’s birth register as a Miner. Mining at places like Cornish Hill was so named because of the many Cornish miners who came and brought their many skills in mining to the area.   Now I’m following a hunch here but John and Sarah had had their children in the Daylesford area and a Mining Surveyors Report put together in 1881 for the government included in its reporting that a Moss & Co. held a granite mine at a place called Foord’s Reef.  Now granite was something that the miners from England were particularly skilled at managing.  It is highly possible that our John Moss was involved in this mine.  Let’s not forget that his wife was from mining areas of Cornwall and John himself was from a mining background.  So it would all make reasonable sense.

John and Sarah had a good sized family for the time.  Thomas Richard known as Tom Moss was born at Happy Valley in Victoria in 1865.  Tom worked for many years on the Victorian railways as a Railway Officer.  He lived with his mother at 102 Orrong Road in Elsternwick/Armadale until his death aged 79 in September 1944.  Tom left behind a modestly comfortable amount in his will ‘mainly to relations’ (24 Nov 1944, The Age). It is likely that Tom never married.

Alfred John (Alf) Moss was born in 1867 in the Ballarat district (as most of his siblings would be).  By 1927 when his mother died it appears Alfred had been living many years in South Africa.  I’ve had difficulty tying Alfred exactly to different locations as my access to SA records has been moderate.  I did not know until recently that Alfred had been in SA as my own great-grandfather, his brother John was also living there for some years. As it appears Alfred got there before my ancestor, mine must have followed Alfred over. Why they went to SA I’m not sure.  I know that my great-grandfather John Moss carried on businesses there. I would like to know more about how and why these two Moss fellows were in SA.  Alfred must have lived out his life there as to date I’ve found nothing to indicate his permanent return to Australia.

Mary Ellen (Nellie) Moss was in 1888 also in Ballarat.  In 1899 she was living in Albert Park, Melbourne.  At the age of 31, she was a bridesmaid at her sister’s wedding and was recorded as Miss Moss. Nellie died in 1947. She did not marry.   MOSS.-The Funeral of the late Miss MARY ELLEN MOSS will leave our Chapel, 1217 High st. Malvern. THIS DAY (Tuesday. January 7). after a service commencing at 11 a.m.. for the Brighton Cemetery.  The Argus.

Arthur Moss was born in Ballarat, in 1870.  Arthur married Gertrude Eleanor Bower on the 12th November 1900 at the Albert Park Wesleyan Church.  By January 1930 they were living at Treasury Reserve in inner Melbourne. I suspect this would have been near what we now call Treasury Place so near State Parliament. Arthur must have been doing quite well for himself as on the 4th Nov 1910 it was reported in the Midlands Advertiser (Moora) in West Australia, that Arthur Moss of Elsternwick had disposed of 1000 odd acres of land at a satisfactory price to a Mr. Duncan Campbell.

Emma Maude (Em) Moss was born in Ballarat, in 1872.  Emma married Charles Neil on the 28 March 1899 at the Albert Park Wesleyan Church. Emma was living in Albert Park and Charles Neil in South Yarra. The bride was given away by brother TR Moss. This leads me to believe that her father had passed away sometime before this. Emma died in in 1948 at the beachside suburb of Sandringham.

John Henry (Jack) Moss was born in Daylesford in 1874.  John would go on to have two marriages.  One to Dorothy Mitchell in South Africa.  He would later meet his second wife there (Mary Alice Mohan) and they would return to Australia with one of his sons from his first marriage, her three children from her first marriage and their two sons from their marriage. John Henry was my great-grandfather. He died in 1943 and is buried in the Brighton cemetery in the Methodist section.

Is this our John Moss?

In the March of 1895 a John Moss of 114 Coventry Street, South Melbourne and Alma Road, St Kilda (near the High St end) a produce dealer of wood and coal etc, had declared bankruptcy with the causes of insolvency being depression in trade.  Also he was reported as having had a long sickness with an inability to collect debts because of this.  The business was reported to have been an old-one of established value. The assignee charged with disposing of the business assets was a Mr. Cohen. The accountant who managed the final sales was Bernard Michael and Co. Public Accountants. 30 Elizabeth St, Melbourne.  The property was again assigend later in May (in an attempt to recoup sales), to Bernard Michael & Co, Trade Assignees.  30 Elizabeth St, Melbourne.

I don’t know if the above is our John Moss.  After months of searching and researching it is about the only John Moss of the time and at this location that makes sense. However, at this time I can’t definitively prove this is our John.  What has further confounded me is that I cannot find any reference to date to his death or indeed where he died.  Based on one of his daughters’ weddings and the fact that her brother gave her away I would assume that John was either too sick or had died to be able to do this rather traditional duty.  This was in 1899.  When Sarah died in 1922 she was recorded as a relict of, meaning the living wife of, so I can only assume that they were still married at the time of his death. Very confusing and odd this one.