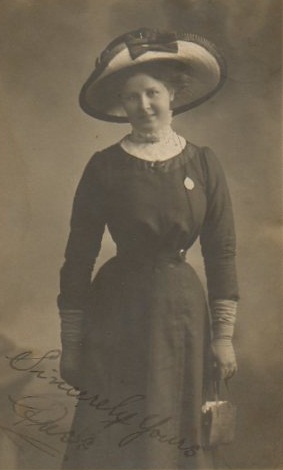 I’m sorry I didn’t meet my great grandmother.  I was two when she died and living in New Guinea.  By the time I was older and began looking for her story it came as a pleasant surprise to know that she too had lived in the northern tropics and it would appear had had the soul of the adventurer about her.

Priscilla was known to her family as “Press” and to her grandchildren later in life she went by “Pat”.  She was born in 1891 to Matilda Mitchell and William John London, Orchadists in the Kurrajong.  She was the second last of a very large family of children.  Priscilla’s childhood would have been quite a noisy and rambunctious one with such a large family.  Maybe as one of the youngest she was able to get away with more mischief.  Whose to know?  I imagine this because at the tender age of 21 she had shot loose from the rural community of Richmond in the Hawkesbury and married a flash Sydney boy, Arthur Edward Helmrich.   Quite a jump up from the nearby parish in Richmond where the family had attended for many years.  Sydney city for Priscilla at this time must have been incredibly exciting and somewhat overwhelming compared to what she was used to. Arthur Helmrich and Priscilla Georgina London were married at what was then St Paul’s Anglican Church at 242  Cleveland Street. The suburb now being known as Redfern. The church is no longer Anglican but a Greek Orthodox church. 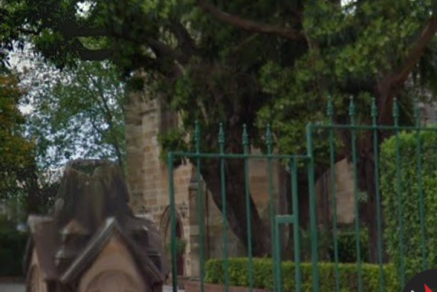 Their wedding was on the 23rd December, 1911. Witnesses at the wedding were Arthur’s brother George and sister Florence Helmrich.  Here is a link to a page for Arthur Helmrich Arthur Helmrich

Arthur’s own family background was quite urbanised.  He had been born and raised in the inner city of Sydney.  His father a successful businessman in the city had suicided when he was only ten following a bout of serious depression.  His mother’s family had been shipping merchants and come from the Carribbean to Australia. Both of his parents came from financially comfortable backgrounds. His own family was small compared to Priscilla’s large family.  Arthur or Dick as he was known must have been a bit of an opportunist because throughout his life he often seemed to be involved in schemes that could potentially bring about quick fortune even if it was bordering on being a bit on the shady side.

On the 24th November  1912 Priscilla and Arthur welcomed their first child , Audrey Florence Helmrich.  In 1914 their second child Edward (Ned) Burnett Helmrich was born in Sydney.  By the 5th April 1918 when my grandmother Neva Irene Helmrich was born, the family had moved to Mt. Morgan in Queensland where Dick was involved in the mining business as an Engineer.  In 1919 Arthur was listed as a Miner and Priscilla as Home Duties. They were  living in Duaringa, Capricornia in Queensland.  On the 1st October 1922 George and Sydney Arthur Helmrich were born however they died near birth. I would suggest that perhaps they were stillborn babies? This must have been a desperately sad time for their parents and families.  In 1925 the family were living in Mt Morgan Queensland.  Arthur was still involved in the mines. During these years they had different properties and addresses.  Arthur even selected some land which he later disposed of.

On the 17th July 1925, Arthur and Priscilla were reported in The Brisbane Courier in a ‘Sly Grog Case’.  At Mount Morgan Priscilla Georgina Helmrich was fined £50 or three months for sly grog selling at Baralba.  A further case was adjourned until next week;

Getting this into perspective, it’s hardly likely that Arthur and Priscilla were up to the standards of famous sly groggers like Tilly Devine or Kate Leigh who were active in Sydney at this time.  They got busted selling liquor from their home without a licence.  Thus the fine.  If they were serious sly-groggers then there would have been some jail time.

In the Police Court this morning, Arthur Edward Helmrich was charged with unlawfully selling a bottle of port wine, and also for having kept liquor for sale in an unlicensed house in Mt. Morgan. Two other defendants had pleaded guilty, and were fined £50 each, while liquor worth over £300 was confiscated. Inspector O’Connor prosecuted, and Mr. J. Pattison appealed for defendant who pleaded not guilty. The Police Magistrateo convicted, and fined defendant £50, and ordered the liquor seized to be confiscated. It was intimated the fine will be paid.

On the 8th June 1929 the newspaper reported Priscilla and two of her children  being aboard the Marella berthing at Dalgetty’s Wharf, Bulimba. They had come from Sydney back to Queensland.  It is likely that they may have been visiting family.

From The Brisbane Courier (QLD) Saturday 8th June 1929.  On the 27th June 1929 the family were again onboard the Marella this time journeying to Singapore.  The family were relocating for for Dick’s work in the mines.  Malim Nawar a tin-mining operation was their destination.  Life in Malim Nawar in Malaya must have had a degree of far east excitement about it. One year they were being hauled into court over sly grog charges and a few years later in 1931 they were making very respectable announcements in the papers for their eldest daughter Audrey’s engagement to a wealthy Engineers son from London.

During their time in Malim Nawar Arthur’s occupation was  an Engineer. What exact role he played in the mines at this time is unknown.   However during their time they enjoyed many of the local colonial pursuits and social opportunities afforded the expats from Australia.

Difficult to see but Arthur and Priscilla are on the far left elephant. Title of news article.  They let the elephants do it in Perak.

In 1933 Priscilla and Arthur were on the electoral roles as having a home at 139 Nelson Bay Road, Waverley NSW. Arthur’s occupation again is recorded as Engineer.

Both of their daughters married in Malaya to men who were involved in the mines.  Audrey married Thomas Cecil Welch. They would eventually move back to Poole in Dorset, England where Thomas was from.  Audrey did visit Australia again from time to time but never comes back to Australia to live.

Priscilla and Arthur’s son Edward (Ned) traveled back and forwards from Malaya and Australia.  In 1937 in Canterbury NSW he married Eva Baker. Ned became a Barber and for many years owned a busy barbershop in Railway Square Sydney. Priscilla like her son Ned also held a Barbershop Licence Card to allow the business to be carried on.  This was a licence allocated by councils to ensure monitoring of standards was met. Priscilla and her second husband John owned another barber shop which was called The Shearing Shed in George Street in Sydney.  They would ‘hire’ out chairs to barbers to use.  Throughout all the census records I have checked Priscilla always gave her occupation as Home Duties, odd.

Back in Malaya, 18 year old Neva married Brian Miles in 1937 in Ipoh, Perak.  Arthur attended the wedding.  On the 1936 electoral roles back in Australia, Priscilla is listed as living (with no mention of Arthur) at 48 Flood Street, Bondi, NSW. This was an apartment building called Savona.

Within twelve months Priscilla married her second husband John Edward Vesperman.  They resided at 52 Crystal Street in Petersham, New South Wales.  Priscilla and John were living in Petersham when the Japanese  army invaded Malaya and Singapore in December 1941. By January 1942 Singapore fell to the advancing Japanese army.  Priscilla must have been beside herself worrying for her daughter and toddler grandson.  Neva told the story of how she and her son had been on one of the last ships out of Singapore as it fell and when she got to Australia she went to stay with her mother and stepfather in Petersham.

In 1952 Priscilla enjoyed a small lottery win.  With the money she took her daughter Neva and two youngest grandsons by ship to Poole in England to visit her other daughter Audrey and her family.  At the same time (likely as a result of the lottery win), Priscilla was investigated by the Taxation Department and was subsequently fined for tax evasion.  That’d be flaming right!

From all that I have been told John was a kind and decent fellow who took great care of Priscilla and cared for her until her death at the age of 81 on the 15th February 1972.  Priscilla’s funeral was held at Rookwood Cemetary.  She was cremated and her remains were kept by her daughter Neva and were interred with her after she died.